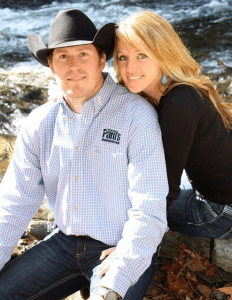 Brandon Brant was born in the small Texas town of Weatherford in the fall of 1982. Five years later he moved to Somerset, Pennsylvania where he spent the rest of his childhood and early teen years. It was not long after that move, Brandon realized his first love; his love for ice hockey. “Hockey became my entire life.” He began to sharpen the skills that would shape his future. Brandon quickly discovered the rewards that dedication and hard work can bring. And, hockey did something for him that nothing else ever had – it sparked the competitive drive that continues to push him to run faster and slide farther.

With great enthusiasm, Brandon spent seven days a week, 12 months a year for the next 10 years on the ice. As he pursued his dream and trained to be “the next big NHL star”, Brandon played on highly competitive teams, including a bout with a minor pro team in British Columbia.

“Hockey gave me a real education. I learned so much about myself, and it helped me realize that anything is possible.” In 1997, Brandon’s father made a decision that had a significant impact on Brandon. Thinking it would provide some entertainment, his father bought a horse for the kids. The minute Brandon started riding; his true passion was ignited. Riding gave him a much needed change of pace; it got him off the ice and out into the open air.

When the time came for Brandon to pick a college, he chose the University of Findlay in Northern Ohio. “They actually asked me to play hockey for them. They have a Division I program, and that was what I thought I wanted.” Brandon was also very interested in Findlay because of their renowned equestrian program. Brandon initiated a meeting with the head hockey coach to discuss his options for playing hockey while pursuing a degree in Equestrian Science. Brandon was stunned when the coach said he was looking for a full-time commitment to hockey from all of his players. Brandon was forced to make the decision that ultimately changed his path. In his heart, he knew he was burning out with hockey. “I had a lot of people telling me what they wanted me to do. I knew it was time to change direction.” Without looking back, Brandon made the decision to enroll in the Equestrian program. And, as they say, the rest is history.

Findlay’s four year Western Equestrian program allowed Brandon to experience the options available to him in the industry. In his junior year, Brandon made the choice to focus all of his attention where his heart was leading him: Reining. For the next two years Brandon rode under the supervision of Clark Bradley and Steve Brown. Brandon watched NRHA Hall of Fame trainers Dale Wilkinson, Mike Flarida and Clark Bradley and knew that he had to follow in the footsteps of the men that he calls “true horsemen”. “Those guys have ridden more below-average than above-average horses. Still they have been very successful and have raised families. To me, that’s a horseman.” He knew that he wanted to take the chance, to step into the ring, and see if he could be successful against them, although he knew it would take time to sharpen those skills. “Those guys have all put their time in and worked hard.”

In 2005, Brandon graduated from the University of Findlay with Bachelors degrees in Equestrian Science and Business Management; and a hunger to pursue his dream. After graduation, he moved to Columbus, Ohio to work for Gabe Hutchins. “I learned a lot from Gabe, especially how to teach the actual maneuvers to the horses.” Brandon stayed with Gabe until 2006. At that time, Brandon was presented with the opportunity to work for Jordan Larson. Moving back to Texas was a big step, but one that he needed to make if he was to learn the inner-workings of the industry and “really learn how to show a reining horse.” Knowing that he made the right decision, Brandon continued to follow his professional hopes in Whitesboro, Texas. Brandon spent about 18 months working with and learning from Larson. “Jordan knows how to show a horse, and I gained a ton of knowledge from him.” With Larson, Brandon was able to fine-tune the mechanics of showing, and he gained exposure to the insights that have shaped his distinctive style of training. During those days with Larson, he learned the overwhelming “importance of being patient with the animals. Jordan tought me how to let the horses make mistakes and how to build their confidence.” He became convinced that this was the key to making his training program stand out among the others.

In late 2007, Brandon accepted a head training position in Cincinnati, Ohio. During this time, Brandon became acquainted with Bob Rosenfeld while looking for a horse to buy. Rosenfeld could see that Brandon was “an honest guy, and hard working; he is naturally talented.” With that in mind, Rosenfeld offered Brandon the position of head trainer at Roseland Farms in Columbus, Ohio.

Since moving to Roseland Farms in 2007, Brandon has accomplished many significant wins in the show pen in a short period of time including: the 2010 NRHA Derby Levels 1 & 2 Champion and Level 3 Open Reserve Champion, 3 consecutive Quarter Horse Congress Championships (including 2 futurity championships), and multiple other big wins bringing his LTE to over $114,000. Over 75% of Brandon’s winnings were won in 2010 alone! Brandon knows that moving to Roseland Farms has been the “best decision I have ever made! We are like a family, and most important of all we have fun…” Brandon will always be grateful for the magnificent opportunity working for Bob has afforded him, and is thankful to have such a beautiful training facility. Moving to Columbus allowed Brandon to settle into a great working relationship with Rosenfeld, and it also gave him the opportunity to meet up with a Columbus based Findlay Equestrian alumnus, Cathy Calendine.

Brandon and Cathy were acquaintances during their time together at Findlay, as she was an English equestrian major while Brandon was a western equestrian major. 4 years after they both graduated, they were reunited in Columbus and started dating. They were married in Somerset on July 31, 2010… a wedding fit for a cowboy and his dearly loved partner! You can see the gleam in Brandon’s eyes when says of Cathy, “She is an amazing woman and has made my life that much better, it all means nothing without someone to share it with.” And share it they do! Cathy handles the business tasks, finances, and even doctors and saddles horses every day. They are looking at a bright future together, as they pursue their enduring passion — putting sound, well trained horses into the show pen.

As Brandon and Cathy work together to be successful, they realize the challenges of the industry and training futurity and derby horses. Brandon decided to take the risk, and with the help of his aunt, in 2007 bought his first two-year old prospect – Dun It With a Splash. He started and trained Splash, selling him early in his 3 year old year to his client, Joe Wolfe, who showed Splash in the non pro futurities. As a 4 and 5 year old, Brandon had taken over showing him again, winning the 2010 NRHA Derby, levels 1 & 2 and reserve in level 3 along with many other big derby wins. Joe and Brandon together brought Dun It With A Splash’s LTE to over $63,000.

Brandon still has skills that he wants to work on – he appreciates the trials that will make him a “better person, better trainer and a better horseman”. “If something’s not a challenge, I’m just not interested in it.” Brandon, like others in the business, would like to be a NRHA Million Dollar Rider some day, and he wants to continue to make it back to the open finals at the NRHA Futurity. However, Brandon really wants to fine tune his abilities and be the best horseman that he can be. When the challenges keep coming and the days are long and hard, he is quick to remind himself that “success doesn’t come overnight”. But, Brandon is dedicated to work hard, strive for quality and wait for the day that he will be looked at as being in the ranks of his heroes, NRHA Hall of Fame horsemen.